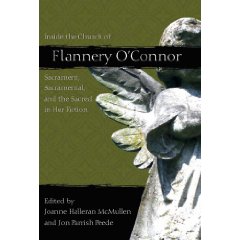 Supremely sensible, no-nonsense, and dismissive of those who want to extract “meaning” from short stories as if they were opening a sack of chicken feed, Flannery O’Connor doesn’t seem to have had much patience with bad literary criticism. Hers is an intimidating intellect. In her letters and essays, the humor is dry and unsparing, and her contempt for fools (and in particular for those with foolish opinions about fiction) is withering. Going into the field of O’Connor studies as a professional literary critic would seem to take a certain amount of nerve. For one thing, if one makes it to heaven, one may meet her there and have to answer to her.A new anthology, Inside the Church of Flannery O’Connor: Sacrament, Sacramental, and the Sacred in Her Fiction, collects essays by ten intrepid souls. O’Connor studies is now a varied and changing field, observes Jon Parrish Peede in his introduction. Four decades after her death, dominance is shifting from those critics who knew her as a woman to those who know her as a body of work. In her essays and letters, O’Connor wrote with wit and clarity about what she intended to do in her stories, which she saw as direct expressions of her orthodox Catholic faith.The essays in the first section read her fiction in what has been the usual way: on her own terms, as dramatizations of church doctrine about the reality of evil, humankind’s need for salvation, and the presence of grace in the sacraments–played out against the backdrop of the rural, Protestant South, with its roving preachers, misfits, and “good country people.” Since she was so articulate and opinionated, and her nonfiction accounts for her fiction so tidily, it’s supremely satisfying to watch a brilliant critic like Williams Sessions synthesize a careful reading of her fiction with church and literary history, her letters and essays, and conversations with the flesh-and-blood woman he knew. It all fits together like a Swiss clock. But perhaps, other critics suggest, there was more to her fiction than she herself saw.In the second section of the book, several writers examine O’Connor’s fiction with a bit more distance from the woman and her own interpretations. A fascinating essay by Jill Peláez Baumgaertner measures the influence of the cartoon version of the Baltimore Catechism O’Connor would have known as a child, tracing images that appear in her late stories. Another essay, by Timothy P. Caron, examines her African American characters, taking O’Connor somewhat to task for the way these characters seem always to serve the spiritual reckonings of white characters but never to experience revelations of their own.The third section includes three contrasting readings of one story, “The River,” with varying opinions about the doctrinal orthodoxy of the baptism undergone by the child. One comes away from this collection with a renewed appreciation for O’Connor’s work: rich enough to sustain multiple readings, its theology is also firm enough to give all kinds of readers something to push back against.Critical essays like these do nothing to diminish the pleasure, shock, and devastation of the stories, and this reviewer knows because she tried it afterwards. Perhaps the highest compliment that can be paid to a book like this is that it makes one want to reread O’Connor immediately.Inside the Church of Flannery O’Connor, edited by Joanne Halleran McMullen and Jon Pattish Peed, Mercer University Press