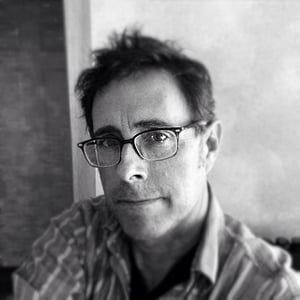 Leif Enger, author of the wildly popular Peace Like a River (2001), has recently published his take on the classic Western tale. So Brave, Young, and Handsome is complete with cowboys, train robbers, whiskey, and even the “tang of gunpowder.” But our hero is not the young cowboy referenced in the book’s title. This is the story of an ordinary man: husband, father, and washed-up novelist Monte Becket of Minnesota. Determined to write a follow-up to his popular 1910 adventure novel, Monte has dutifully penned a thousand words a day for five years–to no avail. Then one day he befriends Glendon, an impish man who lives alone in a barn downriver and spends his days building beautiful boats. Threatened daily by the prospect of failure, and enchanted by Glendon’s mysterious joie de vivre, Monte follows a whim–and his wife’s intuition–and boards a train to Mexico with Glendon, who is off to seek forgiveness from the wife he deserted years ago. Monte is motivated by a vague yearning for adventure, and perhaps by the promise of escaping mediocrity–and he is not disappointed. The trip turns into something of an odyssey, with adventures to rival any tale Monte could have concocted from the farmhouse porch where he spent his mornings writing. The characters propel the story forward, starting with Glendon, whose craving for redemption is a fierce match to his dark past–at one point, he even coerces Monte into giving him a river baptism. Their other companions along the way include Hood Roberts, a boy they meet in a town called Revival. With a hankering for adventure and romance, Hood possesses a youthful ambition that soon gets him into trouble beyond all reckoning. But perhaps most interesting and complex is the character of Charles Siringo, an aging, relentless, ex-Pinkerton detective whose life’s work has taken him in pursuit of the most notorious outlaws, including one reformed train robber, Glendon Hale. A slave to his ambition, Siringo is bent on putting his last conquest behind bars before he dies. He is a figure who demands our admiration and also one who unsettles us–which makes him the perfect villain. Without softening the edges or smoothing the grit, Enger manages to humanize even his most despicable characters, giving us a sense that they’re just a river or a train ride away from redemption themselves. This posture toward Siringo is made possible through the candid and generous voice that narrates the story: it is Monte’s voice, the skillful, observant, and precise voice of someone who has spent a lot of time with words, and yet a voice humbled by his own failures and tempered by a wide, encompassing love.